BORN IN WAR, INDISPENSABLE IN PEACE

This article was originally featured in the July 2020 issue of U.S. TECH

In early 1942, following Japan's surprise attack on Pearl Harbor and its push to occupy much of the South Pacific, the small U.S. Asiatic fleet was forced to retreat southward from the Philippines, through Indonesia toward Australia. In the face of overwhelming Japanese strength, the fleet had to fight with what it had — a dozen cruisers and destroyers, mostly relics of World War I.

Lieutenant Commander Welford C. Blinn, the commanding officer of the USS Pope, was concerned about how their ammunition supplies would perform in action, after long exposure to tropical humidity and corrosion.

He got his answer when, after a desperate fight with superior enemy forces in the Java Sea, the Pope and two other ships were sunk on March 1, 1942. After surviving for more than two days adrift, Blinn and his crew were captured by the Japanese and sent to POW camps. Within months, half of the Asiatic Fleet had been lost, with crews either killed or taken prisoner.

Blinn, whose service on the Pope earned him three Navy Crosses and his crew the Presidential Unit Citation, survived captivity and returned to the United States in 1945. Upon return, he resumed his career at a Navy research laboratory in the Pentagon, in Washington D.C.

At the laboratory, Blinn developed what he wished he had years before — the first color-changing, "go/no go" humidity indicator. When built into ammunition cartons or cases, as they are today, these simple "button" indicators would tell future crews whether ammunition had been exposed to damaging levels of relative humidity during transport or storage.

After retiring from the Navy, Rear Admiral Blinn moved his family to Colton, California, where he launched the Humidial Company in 1948. He patented an improved humidity indicator in 1955 and proceeded to develop new commercial and military humidity indicator buttons and cards that proved to be reliable, versatile and easy to use. In doing so, Blinn pioneered a new industry with global applications.

Within three years, Humidity indicators had been adopted for use by the U.S. Atomic Energy Commission, the U.S. military, and within the NATO military alliance. Soon, word began to spread to civilian businesses and industries interested in long-term protection or shipping products internationally.

It was only natural that companies involved in manufacturing desiccants would begin to take an interest in Blinn's growing company.

Desiccants are natural or synthetic compounds that adsorb and hold moisture, keeping products dry. Humidity indicators, which validate that products are maintained in a dry condition, are a sensible complement.

Eventually, Humidial was acquired by a desiccant manufacturer, Süd-Chemie Performance Packaging, shortly after Blinn's death in 1989. The latter became part of Clariant when it was acquired itself in 2011, creating the Clariant Cargo & Device Protection business group, based in Colton, California, and Belen, New Mexico. Today, the Humidial indicator, now known as the Clariant Humitector™ brand, is at the core of an entire family of humidity indicator products, as well as a full line of desiccant products.

While many things have changed for this business unit over the past 70 years, a family member remains at the helm. This is Michelle Martin, the granddaughter of Rear Admiral Blinn, who, as a longtime employee, is as proud of the organization's latest patented invention — the Humitector Type 2 non-reversible humidity indicator card — as her grandfather was of its first button-style humidity indicator.

"For me, this organization is a legacy, and I'm proud of it. We've been making humidity indicator products for 70 years — we know what we're doing," says Martin. "I want to ensure that everything produced by Clariant Cargo & Device Protection is going to reflect positively on us and on the quality of every component and product that we help to protect." 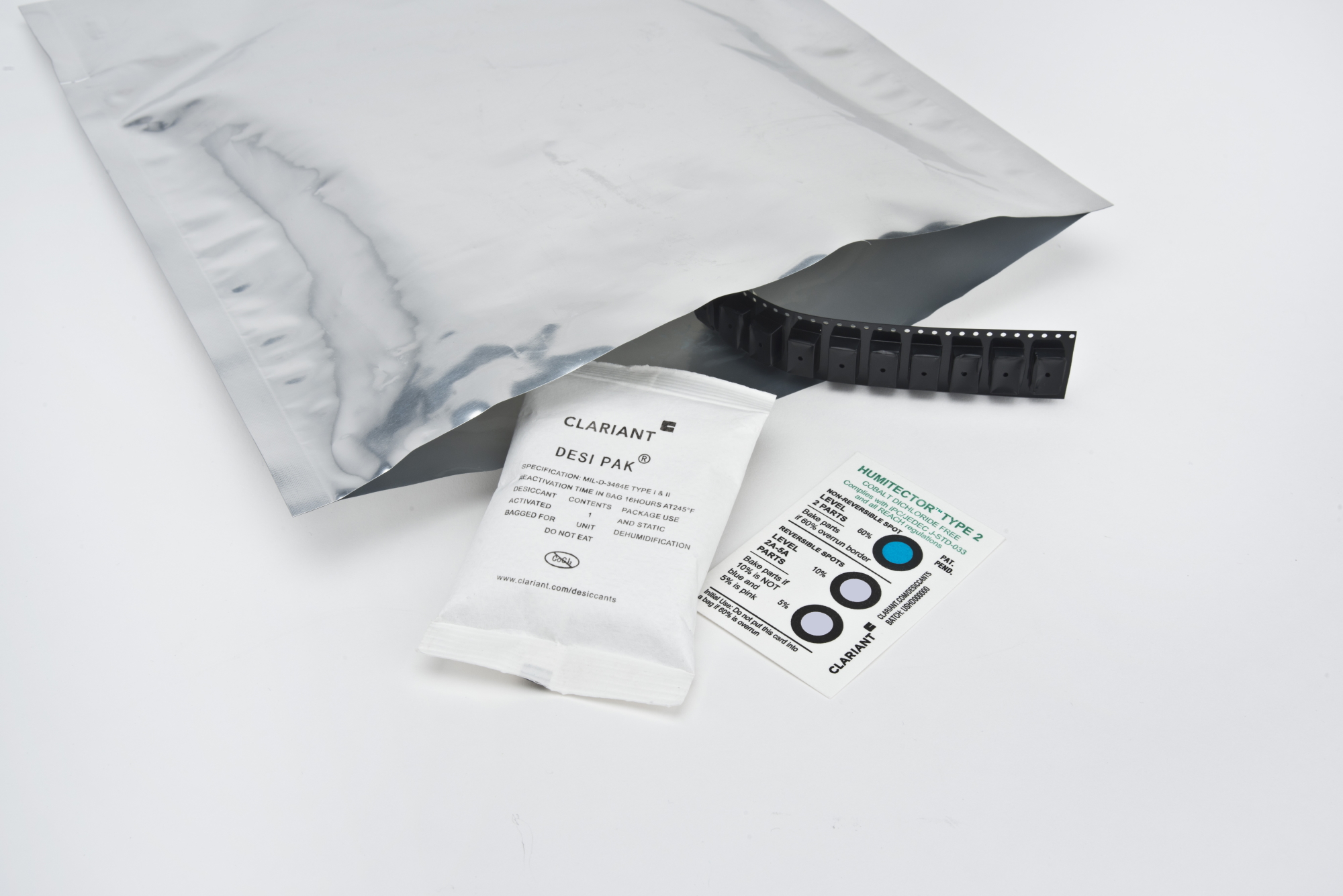 The emergence of the computer industry and the importance of protecting electronic components from moisture-related damage has played a pivotal role in the evolution of Humidial and its successor Clariant Cargo & Device Protection.

By the late 1980s, computer makers had developed commercial re-melt soldering processes to attach microprocessors and other small SMT devices to PCBs. However, a leading manufacturer found that if these components were exposed to moisture during storage or shipment, the essential solder connections could pop or crack during assembly, causing expensive problems and customer rejects.

In 1987, three specialized companies in the field of desiccant, humidity and barrier-film materials, one of them being Humidial, were asked by a major semiconductor manufacturer, if there was a way to ensure delivery of dry, ready-to-solder SMT devices to global customers.

Together, these companies developed a solution, and proposed a new kind of electronic component package, a "dry pack," that would protect surface mount devices, circuit boards and other vital components from moisture. This white paper evolved into the first standard, known as EIA-583, Packaging Material Standards for Moisture-Sensitive Items, released in 1991.

The standard specified that components be packaged in moisture-barrier bags, together with a humidity indicator card and a moisture-adsorbing desiccant, with a shelf life of 12 months. For this application, Humidial developed the Humitector Type 1 "reversible" humidity indicator card and provided desiccant packets filled with bentonite clay, a naturally occurring, highly adsorbent desiccant material.

This was the perfect solution. When the packages were opened, the humidity indicator card, now known to the industry as an HIC, displays if the level of humidity present is acceptable. This measure, in turn, tells manufacturing personnel how much heat drying is required to prepare devices and to ensure a trouble-free final reflow/assembly process.

A World of Applications Humidity indication and desiccant technology continue to evolve in response to global needs. Until recently, the HICs used in dry packing were of one type — reversible, so they would only indicate current humidity conditions.

However, at the request of electronics industry customers who wanted a more complete history of the package, Clariant developed the Humitector Type 2 (patent pending), a new, non-reversible HIC. This card combines two reversible indicators showing current humidity with one non-reversible indicator that activates if the moisture-sensitive contents were ever exposed to high humidity levels of 60 percent RH or above for an extended period. This innovation assures the buyers of moisture-sensitive reflowable SMT components, PCBs and other electronic devices that their parts have never been exposed to potential damage.

For dry-packing electronics, the desiccant may be of several types, A common and cost-effective desiccant for this application is usually bentonite clay, a naturally occurring mineral. Clariant's Desi Pak® bentonite clay desiccant bags, meet MIL-D-3464 (MIL Spec) Types I, II and III, as well as comply with the JEDEC standard for semiconductor packaging.

The company also offers Sorb-It® with silica gel for a variety of package sizes, as well as Container-Dri® II, which has the absorption capacity to protect the contents of seagoing cargo containers. Container-Dri II carries the Clariant internal EcoTain® label for products that are identified as being particularly sustainable and deliver excellent performance to customers.

But, humidity indicator cards and desiccants serve a much wider array of applications than computers, electronics and military products. Through the years, they have found applications with global businesses involved in agriculture, food products, manufactured goods, automotive parts, clothing, and leather goods.

This is because reliable humidity indication and moisture control gives shippers and buyers alike a means of monitoring moisture exposure and preventing damage — whether to packages or containerized cargo — caused by everything from rust and corrosion to water damage, mold or spoilage.

Today, the technology envisioned by Rear Admiral Blinn protects everything from bulk and bagged agricultural commodities and foods to clothing and leather goods, finished automotive and metal products, and more.