Get your engine going?

If in the 1930s you had a little money to spend and were looking for a way to make your car stand out from the rest, you had the option of giving it a brilliant silver sheen – made from actual fish scales. Yes, believe it or not: The first metallic car paints were manufactured from real herring. According to auto color historians, it took thousands of them to paint a single car, and their scales were crushed and worked into the coating just like the metal flakes of modern metallic paints are today. This, of course, seems like a pretty raw deal for the fish, and we’re probably all very glad that the same beautiful luster can now be achieved by other means.

Would an exceptional car color like that (even if perhaps not made in that exceptional way) have been something you would have gone for back in those times? Or would you have been one of those easy customers who didn’t flinch when Henry Ford said: »You can have any color you want – as long as it’s black.«? That was what the famous inventor of the Model T decided in 1909 to make his cars more affordable and easier to produce. Luckily for you if you think black should be reserved for London taxis and secret service vehicles, putting color on cars soon became less expensive.

As can be learned from the latest edition of Clariant’s Automotive Trendbook, which traces the history of car colors from the beginning to today, dark shades continued to prevail for a while nonetheless. So if you’ve always had the impression that gangsters in old movies only drive black cars, it’s not just because these movies were filmed in black and white. During the war, somber colors apparently were also preferred for the grim reason that they made a harder target for bombing squads.

After this dark era, everybody seems to have been ready to lighten up again, and as incomes grew, friendly tones of red, blue and green began to pepper the streets like polka dots. Car lovers see the 1950s as the period when »car culture« was born, and if you’re partial to pastel colors, this would definitely have been your time. It also marked the beginning of rock ›n‹ roll and many other thrilling new trends – which perhaps explains why the hero from the movie »Back to the Future« ends up here when he actually does take his car to another decade. 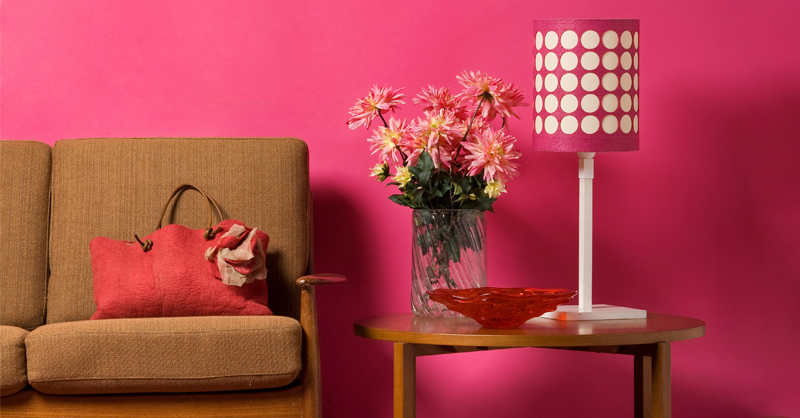 In the 60s, soft pastels were joined by bold candy colors, which now not only adorned cars but also everything you could possibly give color to in homes, from sofas, chairs and rugs to electrical appliances and coffee mugs. The hippies went even further and hand-painted their cars into flowery peace wagons – a desecration of the revered automobile some drivers actually wanted to see prohibited. In Japan, authorities really did ban the use of certain colors, even if only to prevent confusion with police cars and fire trucks.

The 1970s are considered the decade when the general zest for color reached its zenith. If you buy a vintage car from that period, chances are you’ll get it in a bright crazy color that might as well be bouncing off a disco ball. It’s either that or a sensible vehicle in brown, green or beige, which some deem even poorer taste and others see as a first sign of eco-sensibility caused by the oil crisis.

After the disco era, however, colors started to fade. And for people who like colorful cars, setting the dial of their time machine to the decades that follow becomes less and less interesting. 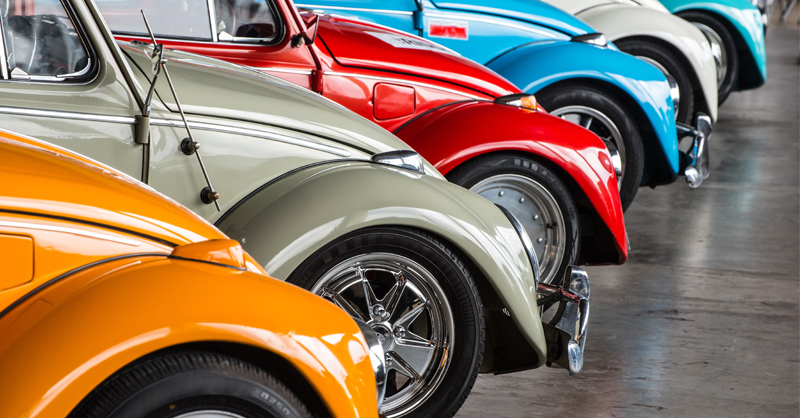 Sure, in the 80s everybody wanted to drive a bright red sports car like Magnum P.I. (who probably wasn’t aware that the Ferrari he regularly »borrowed« was made even more expensive by its color, which back then was still very difficult and costly to produce). And when eco-mindedness turned mainstream in the 90s, green coatings had another brief heyday. But then rose up what by today has turned into a virtual car color whiteout.

When the first fashionable mp3 players and smartphones came out, did you look at their sleekly designed cases and think: Hmm, why not buy a car in that color? Well, if that’s so, then you’re in good company, because according to car color designers, that’s what a lot of people thought. Especially white, which before was associated with things like refrigerators and bathroom tiles, became the new color of choice.

In 2018, white has been the most popular global car color for the eighth time in a row, and this by a wide margin. Four out of ten new cars are purchased in white now, and together with other neutral shades like black, silver and gray (which some prefer to call non-colors), white takes up 80 percent of the global auto palette. So if the decade you identified most with in this post was the color-crazy 70s, you should perhaps really think about getting on board that time-traveling DeLorean (even though it actually doesn’t even have paint and is famous for its completely bare stainless-steel body).

But then again, why rush into things? There are predictions that new technologies like electric cars will also give a jolt to automotive color schemes. And even though many self-driving cars actually »prefer« white because that’s the color they can »see« best, the coating formulators from Clariant have found a way to maneuver around this problem.

If you want to know how, and find out about many other new pigment technologies and trends, you can browse through the already mentioned Trendbook. It also presents four sets of cutting-edge coatings that can help you make a final decision on which decade’s car colors you like best – and carry the enticing names Just Drive!, Constants of Nature, Time Warp and Rock it, Science!