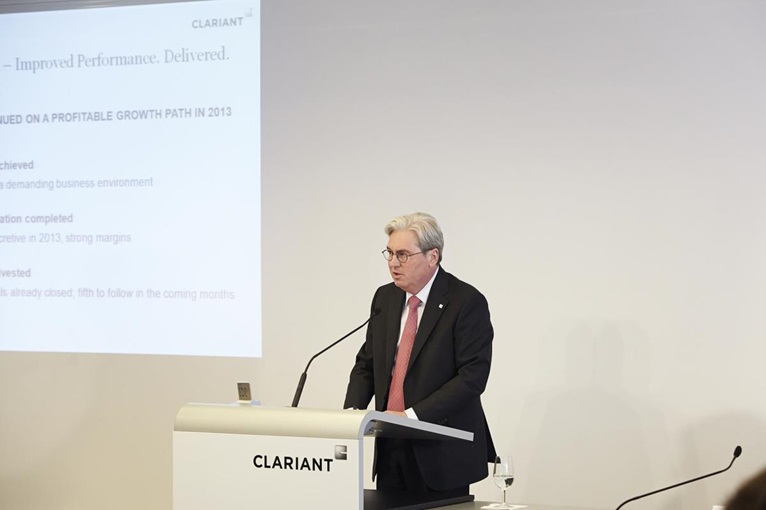 "Clariant has made good progress in 2013. The unfolding operational strength of the company became visible in a challenging economic environment. After the divestment of several businesses, Clariant is now a more profitable, less cyclical and well-balanced specialty chemicals player," said CEO Hariolf Kottmann. "2014 will be a year of organic growth in the four Business Areas. This will bring us closer to our mid-term target to position Clariant in the top-tier of the specialty chemicals industry, characterized by an EBITDA margin before exceptionals between 16% and 19% in 2015 and beyond."

In an overall challenging business climate, all Business Areas, with the exception of Catalysis & Energy, achieved sales growth in the low to high single-digit range. In Care Chemicals both Consumer Care and Industrial Applications posted solid growth. The sales improvement in Natural Resources was chiefly based on strength in Oil Services and Refinery Services. Sales growth in the Plastics & Coatings Business Area was led by a mid single-digit increase in the Pigments business, while the other businesses, Additives and Masterbatches, grew at a more moderate pace. Catalysis & Energy was 2% lower due to a softer change-out cycle in the Petrochemicals industry and some project delays in Asia.

At 28.7%, the gross margin was slightly down from the 28.9% recorded in the year before. A favorable volume/mix development was more than offset by a negative currency impact and slightly higher costs for the underutilization of production capacities. Year-on-year, sales prices were marginally higher while raw material costs were slightly lower. The EBITDA before exceptional items from continuing operations increased by 5%, reaching CHF 858 million, up from CHF 817 million one year ago. The corresponding EBITDA margin improved to 14.1%, compared to 13.5% in full-year 2012, unfolding step-by-step the inherent earnings potential of the company.

Exceptional items including restructuring, impairment and transaction related costs decreased to CHF 104 million versus CHF 135 million in the previous year. Those charges in 2013 were mostly related to the disposal of the Water Treatment business, ongoing minor site closures and the finalization of the integration of Süd-Chemie. The net result from continuing operations improved by 59% to CHF 323 million compared to CHF 203 million in the previous year. This increase was driven by a better operating result and lower interest costs after the redemption and conversion of two bonds in the first half-year.

Net debt was reduced to CHF 1.500 billion and was therefore lower compared to the CHF 1.789 billion recorded at year-end 2012. The reduction was less than targeted due to lower proceeds and late payments in connection to the disposal of some businesses. However, the gearing, reflecting net financial debt in relation to equity, improved to 54% from 67% at the end of 2012.

Fourth Quarter 2013 – Dynamic Sales Growth in All Business Areas In the fourth quarter of 2013, Clariant reported 8% sales growth in local currencies. This was mainly due to 7% higher volumes while sales prices added 1% and raw materials remained at the previous year’s level. In Swiss francs, sales were 4% higher, at CHF 1.563 billion, compared to CHF 1.509 billion a year ago. All Business Areas recorded strong sales growth in the fourth quarter, led by Catalysis & Energy with an increase of 12%. Natural Resources and Plastics & Coatings each achieved sales growth of 9%, Care Chemicals was equally strong, adding 7% in sales. The Catalysts business experienced the usual seasonal strength and benefitted from the partial realization of projects in Asia that had been postponed in the third quarter. Consumer Care and Natural Resources continued on their growth path of the earlier quarters in 2013 while Plastics & Coatings recovered substantially from the low levels recorded in the prior-year period. At the regional level, Asia/Pacific, Latin America and North America achieved double-digit growth in local currencies. EMEA was flat with sales in Europe recovering from the trough levels observed in the year-ago period, offset by ongoing weakness in Middle East & Africa.

The gross margin was lower year-on-year, at 28.2% compared to 29.3% in the previous-year period. This was mainly due to unfavorable currency effects in the emerging markets and Japan as well as slightly higher costs for the underutilization of production assets. The EBITDA margin before exceptional items was nearly unchanged at 15.0% compared to 15.1% in the fourth quarter of 2012.

Operating cash flow amounted to CHF 261 million compared to CHF 284 million in the fourth quarter 2012, reflecting the usual seasonal pattern with a strong cash flow generation in the second half-year.

At Group level the introduction of IAS 19 (revised) Employee Benefits as of 1 January 2013 is reflected in restated figures for 2012. For the fourth quarter of 2012 including discontinued operations, IAS 19 had a positive impact of CHF 4 million on EBITDA and EBIT, while net income decreased by CHF 3 million. For the full-year 2012, the positive impact of IAS 19 on EBITDA and EBIT was CHF 18 million, while net income declined by CHF 10 million.

Clariant has meanwhile stringently executed the announced divestments of the five businesses Textile Chemicals, Paper Specialties, Emulsions, Detergents & Intermediates and Leather Services. With the closing on 30 September 2013, Clariant sold its Textile Chemicals, Paper Specialties and Emulsions businesses to SK Capital, a US-based investment firm. On 15 October 2013, the disposal of Detergents & Intermediates to International Chemical Investors Group (ICIG), a privately owned industrial holding company focusing on mid-sized chemicals and pharmaceutical businesses, was announced and closed effective as of 1 January 2014. The divestment of the Leather Services business to Stahl was announced on 30 October 2013 and is expected to close in the next few months, subject to regulatory approval. Clariant will hold a 23% stake in the combined entity. Hence, all five businesses have been reported as "discontinued operations".

Outlook 2014 – Focus on Performance, Growth and Innovation The solid results allow the Board of Directors to propose to the AGM an increased dividend of CHF 0.36 per share compared to CHF 0.33 per share in the previous year. The distribution is proposed to be made from the capital contribution reserve that is exempt from Swiss withholding tax.

For 2014, Clariant expects an ongoing challenging business environment, characterized by a heterogeneous global economic development and volatile currency markets, especially in the emerging markets. The economic environment in the emerging markets is expected to remain favorable but volatile while moderate growth should continue in the advanced economies, in particular in the United States. In this scenario, Clariant will focus on profitably growing the four Business Areas and on cost efficiency.

For full-year 2014, Clariant expects low to mid single-digit sales growth in local currency and an EBITDA margin before exceptional items above full-year 2013.

Clariant confirms its mid-term target to achieve a position in the top tier of the specialty chemicals industry. This corresponds to an EBITDA margin before exceptional items range of 16% to 19% and a return on invested capital (ROIC) above peer group average in 2015 and beyond.

For more details, please download the PDF of the press release