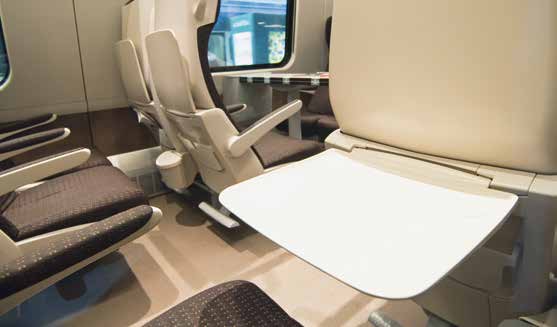 In March 2013, a new European standard for fire safety in the railway sector EN 45545 has been implemented. The new standard consists of 7 parts and the EN 45545-2 describes the test methods as well as the specific requirements that all on board material need to fulfill. According to the EN 45545:2013, all materials on board are classified in groups and have to fulfill specific “Requirement Sets” which often includes several test methods such as smoke toxicity, optical density as well as flammability. Three different material rankings, known as “hazard levels” HL1-3, are defined within each requirement where HL3 represent the highest safety level. Thus, depending on the size of the final part, its placement within a wagon, the type of vehicle it is placed in and where the vehicle travels, a material should fulfill one or more specific requirements and specific hazard level (see table below). 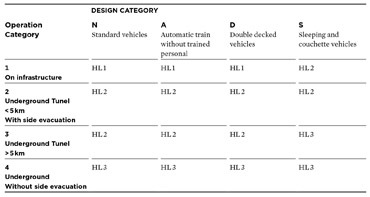 Electronic components based on thermoplastic compounds are inherently flammable due to their organic nature. Hence, the use of flame retardant additives is necessary for such material to pass the required hazard level. According to the new European railway standard, electrical and electronic component must either fulfill the requirements R1, R22 or R23 where both smoke toxicity and optical density are specified. Hence, even though halogenated FR additives are often used in polyamide and polyester compounds to reduce their flammability, their tendency to lead to high smoke density and the formation of toxic HBr gas prevents them from being used for materials that need to be compliant with the EN 45545-2. In comparison, polyamide compounds using Exolit OP products such as the new Exolit OP 1400 (TP) have shown promising results in terms of smoke density and smoke toxicity performances. For instance, when compared to a PA66 GF30 containing Exolit OP 1312 that achieves R22 HL2 ranking, a PA66 GF30 compound flame retarded with Exolit OP 1400 (TP) has a significantly lower smoke toxicity index (CITNLP) because to less HCN produced as well as a lower smoke density. 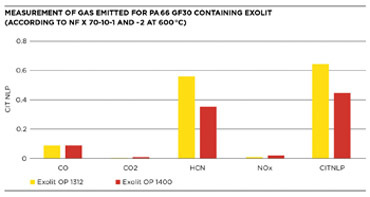