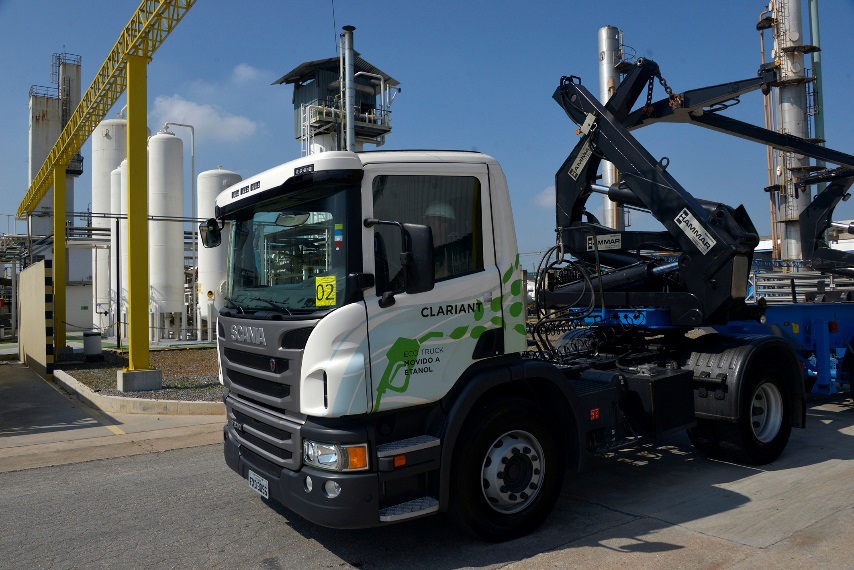 São Paulo, May 17, 2016 – Clariant, a world leader in specialty chemicals, and Scania, one of the world's top heavy-duty vehicle manufacturers, are celebrating the results and the opportunities generated by the partnership established last year, which involved an investment in sustainable technologies for cargo transportation.

In mid-2015, Clariant acquired three Scania P 270 model 4x2 trucks, which run on ethanol and are the first of their kind to be sold by Scania in Latin America. The Ecotrucks, as they are called, transport ISO tanks with a 25,000-liter (6,604 gallon) capacity for chemical products to the fleet of highway trucks, which then deliver the products to Clariant’s customers. The three Scania P 270 tractor units work 24/7 in four shifts. They are used to transport chemical products at Clariant’s plant in Suzano, in the state of São Paulo, which is the company's largest industrial complex in Latin America. The trucks were purchased from the Scania Codema dealership in São Paulo. After nearly a year of using the Ecotrucks, Clariant can verify a reduction in CO2 emissions by approximately 90% compared to the diesel engines that were used before.

“Clariant is making history in Latin America with this innovative project that demonstrates the value of using ethanol trucks for daily operations. Clariant's example is drawing interest from other companies that have already contacted Scania about this solution," says Celso Mendonça, Business Development Manager for Scania Brazil. "Scania values sustainability, so it believes in having an energy matrix that is mixed, uses different sources and allows for fuel savings and a reduction in CO2 emissions. Ethanol-fueled trucks are a solution for companies committed to reducing the environmental impacts of their transportation operations. It is a 100% viable option."

The ethanol fuel used by the Scania trucks contains the Master Batch ED 95 additive produced by Clariant Brasil. The fact that it’s produced locally was essential to the viability of the project as this optimizes costs and logistics. The additive allows engines designed to run on diesel to run on hydrous ethanol because it adjusts the characteristics of the fuel to the engines’ requirements in order to make the vehicle run well.

As the second phase of this project, Clariant started using second-generation ethanol as part of the fuel to operate the Ecotrucks. This ethanol is manufactured from sugar cane bagasse using the innovative sunliquid® technology. “Add value with sustainability is one of Clariant’s strategic pillars. The company's initiative with the Ecotruck project supports its environmental goals and reinforces our approach to sustainability, including verifying the positive results of the solutions we provide to the biofuel market, especially the innovative sunliquid technology," states Paulo Itapura, Head of Sustainability & Regulatory Affairs for Clariant Latin America.

Performance tests verify the performance of the sunliquid technology

Sunliquid technology represents an innovative biotechnological process used for the manufacture of cellulosic ethanol from agricultural waste such as wheat straw, corncob residue or sugar cane bagasse. Clariant offers the international fuel industry an integrated technology solution, from the pre-treatment of the biomass to the final cellulosic ethanol product. During the process, the pre-treatment without chemicals is highly efficient. Clariant developed enzymes that are highly specific to the raw material in order to break down cellulose and hemicellulose into fermentable sugars based on a stable process and a high yield. The enzyme production within the process increases flexibility and significantly reduces production costs. In the next stage, a fermenting agent allows the C5 and C6 sugars to be converted into ethanol, thus increasing the production of the fuel by around 50%.

Since July 2012, the company has been operating a pre-commercial plant in Straubing, in Germany, producing up to 1,000 tons of cellulosic ethanol from approximately 4,500 tons of raw material. At that unit, over 40 containers of sugar cane bagasse from Brazil were processed to manufacture some of the fuel that is already being used in the Ecotrucks at the Suzano plant. "Today in Brazil, we are demonstrating the commercial use of the cellulosic ethanol fuel, using one of the least CO2-producing vehicles available: the Scania trucks," comments Martin Mitchell, Business Development Manager for the Americas. "We conducted several tests to validate the technical and economic viability of the sunliquid technology, which is already commercially available in Brazil. We verified, once again, that producing the enzymes at the plant itself, in a manner integrated with the overall process and specific to sugar cane bagasse, represents the best competitive cost," he states. The sunliquid technology won the 2015 German Innovation Prize for Climate and Environment.

Recent history of Scania's work with ethanol in Brazil

Renowned as a provider of ethanol solutions in Europe, Scania announced that it had begun testing ethanol-fueled buses in Brazil in 2007. After a demo period in São Paulo, the company announced the first sales of ethanol-fueled buses in Brazil. Viação Metropolitana, currently MobiBrasil, and Tupi Transportes, purchased 50 and 10 buses respectively, all of which would be used for public transportation. In October 2011, during the Fenatran convention, Scania launched the first ethanol-fueled large truck for Latin America. Scania is a global provider of sustainable solutions and offers products that run on alternative fuels such as biogas, natural gas, liquefied natural gas, biodiesel, bioethanol, hybrid diesel and electricity, as well as products that utilize hybrid ultracapacitors, a combination of ethanol and battery power, and hybrid diesel and biodiesel technology that meet Euro 6 standards. In Brazil, along with ethanol-fueled vehicles, the brand offers trolleybus chassis and busses that run on biomethane/GNV.