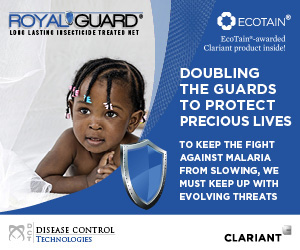 Muttenz, April 25, 2019 – Clariant, a focused and innovative specialty chemical company, today announced it has introduced the most technologically advanced antimosquito masterbatch for use in Royal Guard® long-lasting insecticide-treated nets (LLIN). The new product is the result of a 10-year effort to deal with increasing resistance of malaria-carrying mosquitos to pyrethroid insecticides.

“As efforts to control malaria have ramped up over the last 10 years, particularly in sub-Saharan regions, there has been a dramatic increase in the use of pyrethroid insecticides in treated nets and in indoor spraying campaigns,” explains Francis Baud, Global Business Development Fiber Segment for Clariant Masterbatches. “Although pyrethroids have been very effective, their widespread use has led to a dramatic increase in resistance in mosquito populations. Globally, malaria still kills almost half a million people each year, and hundreds of millions of people, especially children and people with weakened immune systems, are at risk.”

“Since resistance threatens to undermine progress against malaria, all stakeholders are trying to find solutions to this very complex problems. As we prepare to mark World Malaria Day on April 25,” Baud continues, “Clariant and Disease Control Technologies, are excited and proud to announce the introduction of our new dual-action masterbatch solution and first in class Royal Guard LLIN.”

Disease Control Technologies LLC (DCT), Greenville, S. Carolina, U.S.A., has been a leading innovator in LLIN technology and is the first to use the dual-action Clariant Masterbatch in nets offered under the new Royal Guard brand name. The safety, quality and efficacy of the product has been evaluated by the World Health Organization (WHO) and DCT’s Royal Guard became the first in class next-generation, dual active ingredient LLIN, containing a pyrethroid and insect growth regulator, to be added to the group‘s list of prequalified (PQ) vector control products in March of this year.

The new CESA-antimosquito additive concentrates incorporate the pyrethroid insecticide Alphacypermethrin, a strong neurotoxic agent that is the standard anti-mosquito ingredient, which Clariant has used in LLINs since 2002. They also employ another active ingredient, Pyriproxyfen, which inhibits the ability of female mosquitos to reproduce. Any pyrethroid-resistant mosquitos that escape the effects of the Alphacypermethrin will still be affected by the Pyriproxyfen growth inhibitor, which limits egg laying, larval-pupal transformation and the emergence of functioning young adult mosquitos, thus reducing the overall population.

What makes the Clariant technology special is the way in which the insecticides are blended into the masterbatch, allowing a permanent but slow release to the surface -- just enough to kill any mosquito by contact.

LLIN are made of high-density polyethylene (HDPE) monofilaments. The masterbatch is introduced into the HDPE during extrusion of the fibers. Orientation of the PE molecules binds the precise amount of insecticide inside each filament before they are knitted into nets. Once in use, and over the three year service life of the LLIN, small amounts of the active ingredients migrate to the surface of the fibers so that mosquitos that land on them are immediately affected. Because the active ingredients are tightly bound on a molecular level inside each monofilament, the LLIN nets can be washed up to 25 times with no loss of efficacy.

DCT introduced its first LLIN, dubbed the Royal Sentry®, in 2008 and earlier this year, it launched Royal Sentry 2.0. Both are pyrethroid-only nets. With the introduction of Royal Guard LLIN, the company now offers three different mosquito control nets, all of which take advantage of the innovative Clariant masterbatch technology.

The new CESA-antimosquito masterbatches have qualified for the Clariant EcoTain® label, which is applied to products that offer outstanding sustainability advantages. EcoTain-designated products undergo a systematic, in-depth screening process using 36 criteria in all three sustainability dimensions: social, environmental and economic. EcoTain products significantly exceed sustainability market standards, have best-in-class performance and contribute overall to sustainability efforts of the company and our customers.

® TRADEMARK OF CLARIANT REGISTERED IN MANY COUNTRIES.
Royal Guard® AND Royal Sentry® ARE TRADEMARKS OF DISEASE CONTROL TECHNOLOGIES LLC.