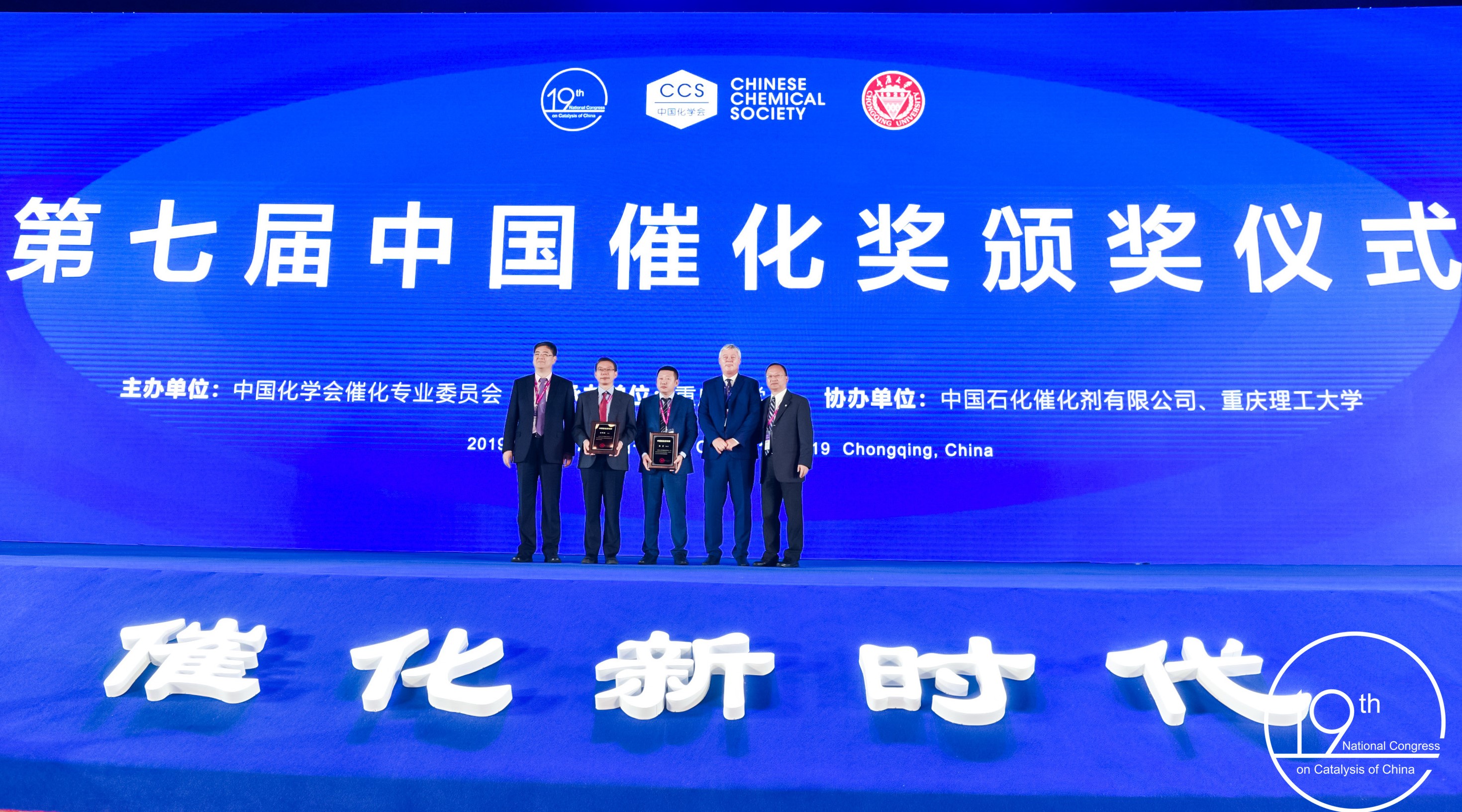 Munich, October 15, 2019 – Before the eyes of over 3000 leading experts in catalysis, Prof. Weixin Huang and Dr. Yong Yang were presented the Catalysis Society of China’s “Young Scientist Award” by Shizhong Zhao, Clariant’s Head of Catalyst R&D in China and Jens Perregaard, Head of Global Hydrogenation & Custom Catalysts. The prize recognizes researchers below the age of 45 years for their outstanding contributions to catalyst technology.

Dr. Yang, from the Institute of Coal Chemistry at the Chinese Academy of Sciences, was honored for his research in Fischer-Tropsch synthesis, while Prof. Huang, from the University of Science and Technology of China, was distinguished for his achievements in oxidation catalysis. The scientists received grants of RMB 100,000 in an official ceremony held on the first day of the 19th National Congress on Catalysis of China (NCC).

As a further element of Clariant’s commitment to China and its partnership with the Catalysis Society of China, the company will also sponsor the biennial NCC “Achievement Award” until at least 2025. This coveted distinction is offered to individuals for breakthrough catalysis research in China.

Global and local long-term partnerships with universities and research institutes are key to the success of Clariant’s Catalysts business in China. The company’s footprint continues to grow, not only through the expansion of local production, but also local innovation. As described by Marvin Estenfelder, Head of Global R&D at Clariant's Business Unit Catalysts, “Clariant’s vision is to lead catalyst innovations that benefit China and beyond. Hence, it is essential to encourage local research with influential partners like the Catalysis Society of China. It is also the reason why a major new catalyst R&D center is being created at the One Clariant Campus in Shanghai.”

Prof. Can Li, President of the Catalysis Society of China, also welcomed the sponsorship, stating, “It is not only important to encourage and honor our academic advances, but also to ensure that they contribute to progress in industry applications. That’s why it is essential for the Catalysis Society to collaborate with industry leaders like Clariant.”

The Catalysis Society of China is the main organizer of the NCC, which is co-hosted by Chongqing University this year. For the first time, the biennial congress welcomes participants from all over the world to promote international cooperation. The 19th NCC, held from October 13 to 17 in Chongqing, focuses on the role of catalysis in new energy sources, efficient use of fossil and biomass resources, and abating environmental emissions.