What if green
cleans?

A day in the life of

Eating out is one of life’s great pleasures. But most of us have never been behind the scenes and seen what it’s really like to work in a professional kitchen. What goes into every plate before it hits the table, what standards must be met – and what do kitchen professionals expect and require from the cleaning products they use?

NOT ALL DIRTY PLATES
ARE CREATED EQUAL

To perform in professional kitchens, cleaners
have to be able to quickly and completely clean a
wide-variety of grime, gunk and grease.

Carbohydrates
The core offender in many diets, carbs are found in everything from starchy potatoes to flour, fruits, fibers and sugars, and are in full force in kitchens around the world.

Proteins
When proteins, such as those in cheeses, creams and eggs, adsorb to a surface, they are an absolute pain to clean and potentially harbor harmful micro-organisms.

Fat
This tasty guy is found in many of our favorite meats and oils, but a nuisance to clean as it leaves a sticky film on surfaces. 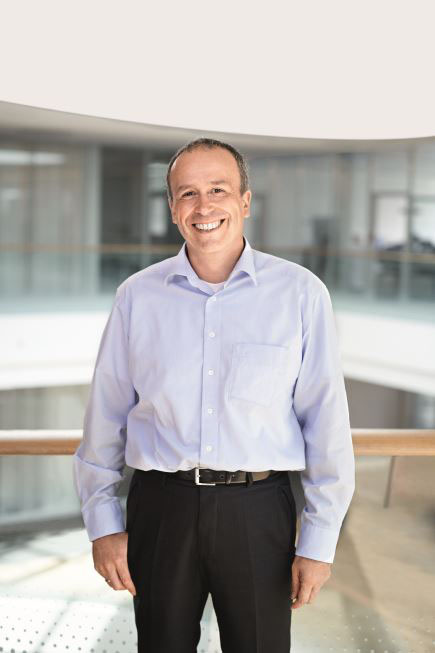 »Dirt doesn’t stand a chance: our chemists developed an environmentally-friendlier surfactant that is not only sugar-based, but also incredibly high-powered. And we call it GlucoPure.«

Welcome to the plate test! Not only does Clariant employee Jasmin Schepp know how to get things clean, she knows how to dirty things up as well. She’s reproduced our dirty plates, smearing them with 5 grams of a special test grime consisting of 60% fat, 30% carbohydrates and 10% protein. How many plates can a squirt of dishwashing liquid clean? Jasmin uses the test liquid she mixed herself, which of course contains our GlucoPure. She squirts 5 milliliters into her test sink. 5 liters of water at 45°C (113°F) come cascading down.

»Most people use way too much dishwashing liquid. They think the more foam, the better. That’s only true to a certain extent.«

The foam serves as a temporary storage space for the surfactants and thus as an indicator for the performance of the dishwashing liquid. »The height of the foam is less important than the persistence of the foam: the more stable the bubbles, the better the product.« Each plate is scrubbed 20 times with a brush on the front for 10 seconds, and 3 times on the back for 6 seconds. 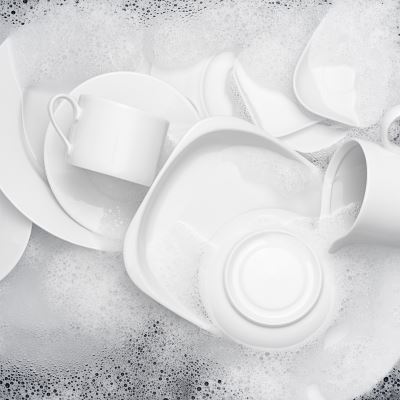 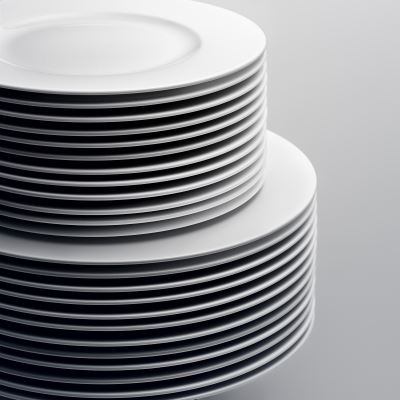 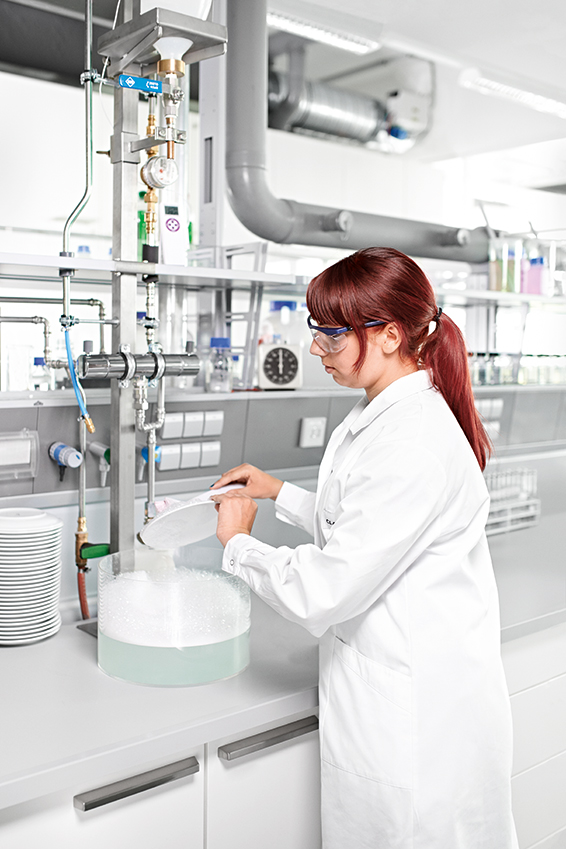 Gradually, the foam bubbles break down due to the presence of oily soil. The foam hills slowly recede into the water, leaving a white blanket on the water surface after the 20th plate. If the blanket begins to separate, the surfactants have been exhausted. Jasmin waits an additional 15 seconds to see if the white blanket reforms. Nope. »That’s it. 29 plates. That’s pretty good.«

How does GlucoPure stack up?

We tested GLUCOPURE to see how it fared against the standard green surfactant on the market, ALKYL POLYGLUCOSIDES(APG).
With a single squirt, GLUCOPURE towers above the competition.

When we clean, we think soap and suds. But what is it that enables a dishwashing liquid to achieve clean? The answer is: Surfactants

A surfactant consists a tail and a head: the former is attracted to the particles of dirt, and the latter to water molecules 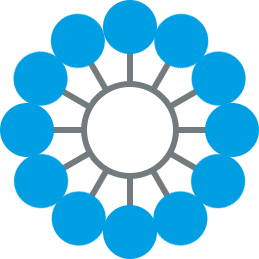 However, sufactants still rely on an external mechanical force to remove the dirt particles from a surface, e.g. a scrub with a sponge or a brush. 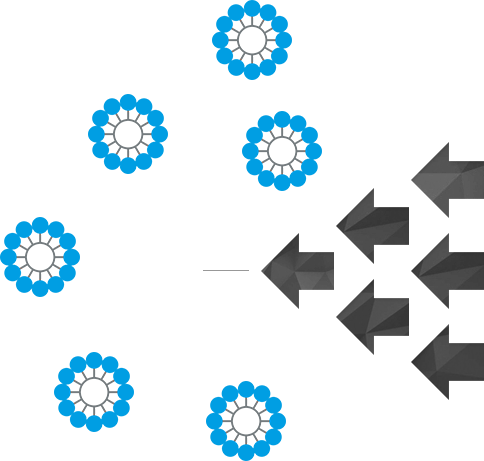 Our surfactant is a perfect mix of green and clean, called GlucoPure. Combine GlucoPure with the following for a powerful dishwashing liquid. 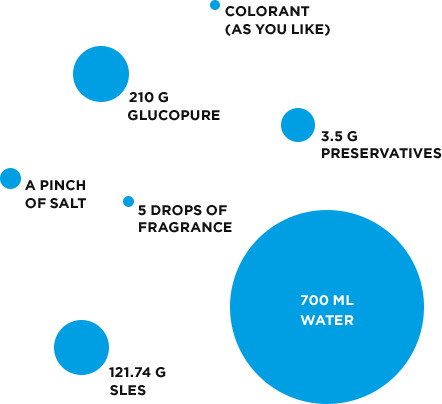 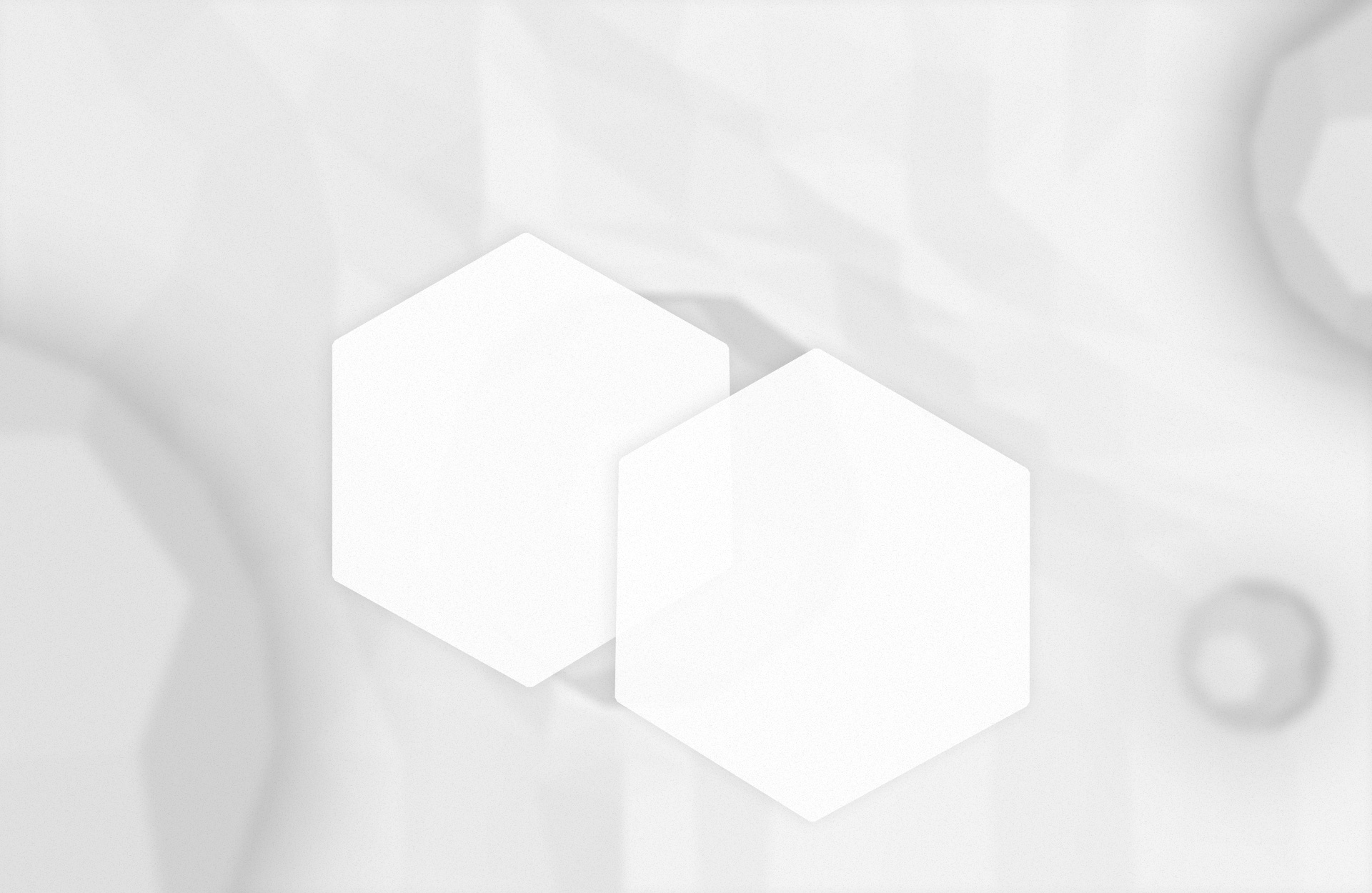 HOW GREEN CAN CLEANERS BE?

Are there any dishwashing liquids on the market that are 100% green?
To the best of our knowledge, no. Even the vast majority of green brands contain a certain percentage of petroleum-based ingredients.

Why then do some green dishwashing liquids print »from renewable resources« on their bottles?
Generally, those claims are quite correct, and such products actually all contain natural-based ingredients. But there is no law stating how large the percentage of the »green« share must be in order to make such a claim.

Could you put into layman’s terms where these essential »non-green« parts are found?
Dishwashing liquids are usually composed of at least two types of surfactants: a primary surfactant, consisting of an anionic head group and a hydrophobic tail, and a secondary, or co-surfactant. The most commonly used primary surfactant is sodium lauryl ether sulfate (SLES). In green products, the hydrophobic part of all surfactants is usually based on biological resources, but the hydrophilic head groups are still mostly synthetically prepared.

»Sure, some ›green‹ dishwashing liquids use nearly 100% green surfactants – but they simply do not perform well.«

And what about the co-surfactants?
Some market products contain the highest possible amount of green surfactants. However, these dishwashing liquids perform poorly in tests compared to their standard counterparts. The co-surfactant that we developed at Clariant is made from 95% bio-based materials, with the remaining 5% containing a petroleum-based molecular structure. The result is an incredibly powerful, nearly 100% green surfactant. With this innovative co-surfactant, the perfect balance between ecology and performance is achieved. We call it GlucoPure, as it is sugar, or glucose, based. Can’t we just stop using petroleum entirely?
Unfortunately, the small petroleum-based part is an essential structural element of our co-surfactant. At present, this cannot be produced using natural-based raw materials, and researchers have not yet found an adequate alternative.

How has GlucoPure fared in tests?
It is twice as effective as the current market-leading, completely green co-surfactant and achieves comparative results to conventional surfactants like cocamidopropyl betaine or amine oxides. But we are not about to rest on our laurels!

OUR APPROACH TO SUSTAINABILITY

EcoTain® is our label for sustainability excellence products and solutions showcasing best-in-class performance. They highlight our contributions to a sustainable future and add value to our customers and society as a whole

OUR APPROACH TO SUSTAINABILITY

EcoTain® is our label for sustainability excellence products and solutions showcasing best-in-class performance. They highlight our contributions to a sustainable future and add value to our customers and society as a whole.

What's in a bottle? 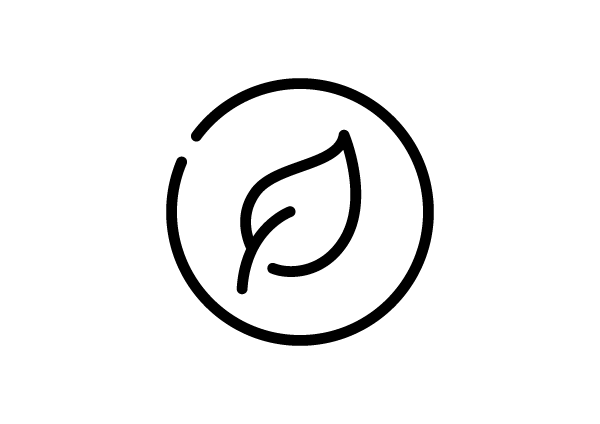 GlucoPure is based on 95% renewable raw materials. 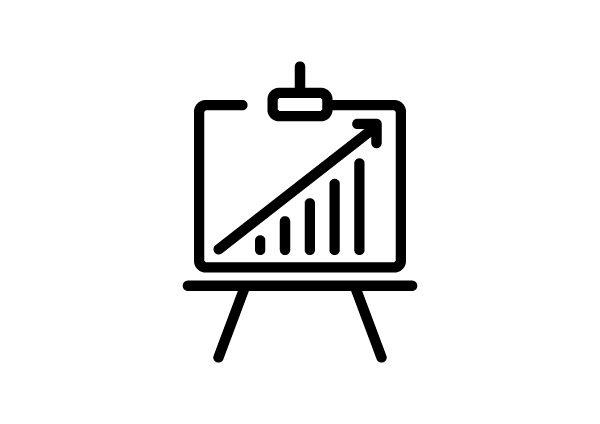 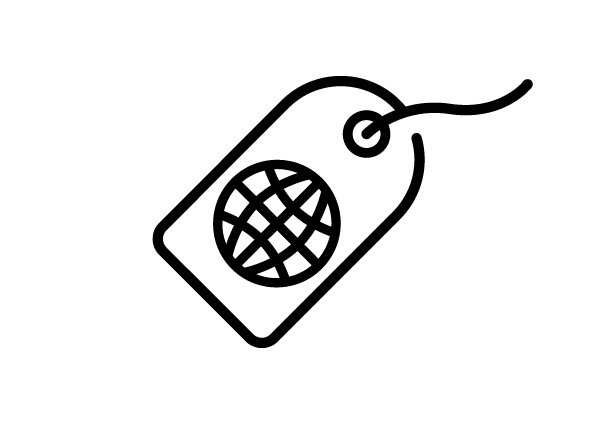 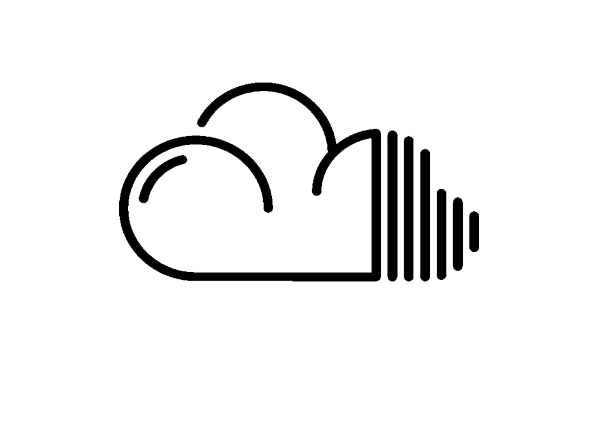 »The sky’s the limit for GlucoPure. Its versatility goes beyond our current Home Care portfolio to form the basis of a powerful line of green surfactants for the Personal Care and Crop Solutions market segments.« 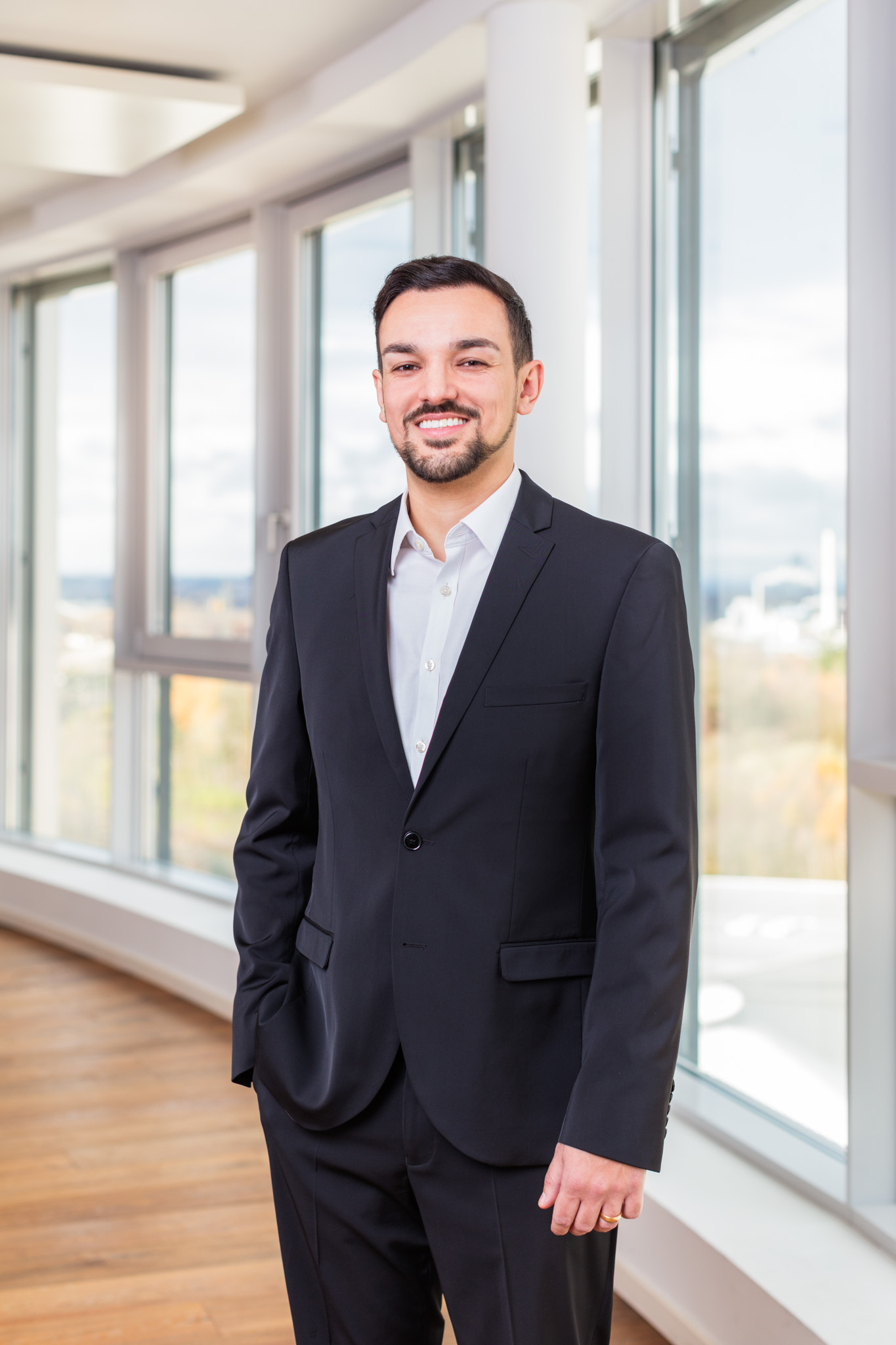 LET’S GET IN TOUCH

We’d really like to hear from you. Please give us
a call or use the contact form bellow for more
information or any questions about GlucoPure.

Enter our world of ideas for tomorrow: Discover Value.

Our task force for everything around the house: Industrial & Home Care.