A mascot with a colorful history

AND A VERY LONG NECK

Giraffes, of course, live in Africa, but there’s an important exception to this rule. The Clariant giraffe, species name Giraffa clariantis, can first be spotted each year at a plastics trade show in North America and then makes its way to other fairs across the world. Like all giraffes, it has long legs, an even longer neck, and a very friendly face. Unlike others of its kind, however, it changes its coat to a new, dazzling color every year and, with its anniversary debut at the fair this September, has reached an outstanding 50 years of age!

Company mascots can have a remarkable ability to take on a life of their own. In the pigments industry, there is perhaps no better example for this than the small giraffe that started out as a simple promotional toy for Clariant’s heritage company Hoechst in 1969. Purple, bendable, wearing a sweet smile on its white face and the company logo on its breast, the gangly creature won the heart of a Hoechst manager from the US, who instantly ordered 20,000 of its like. He also had the idea that the giraffe would be a good item for showing off new or trendy pigments for plastics each year – and the long, colorful history of the long-necked mascot began.

The giraffe kept on its original coat for its first trade show gig in 1970, but from then on took up a yearly habit of color changes that would make a chameleon blush. Yellow, orange, dull chartreuse – with every new color, the merry little mascot became more popular, and that you could twist its wire-boned body into greater contortions than a spider monkey’s probably did its part too. By 1976, the 200th anniversary of American independence, things had gotten far enough to warrant a special edition in red, white and blue. By the ‘80s and ‘90s, the giraffe was handed to eagerly waiting customers and collectors in metallic brown, pink, and mint green. 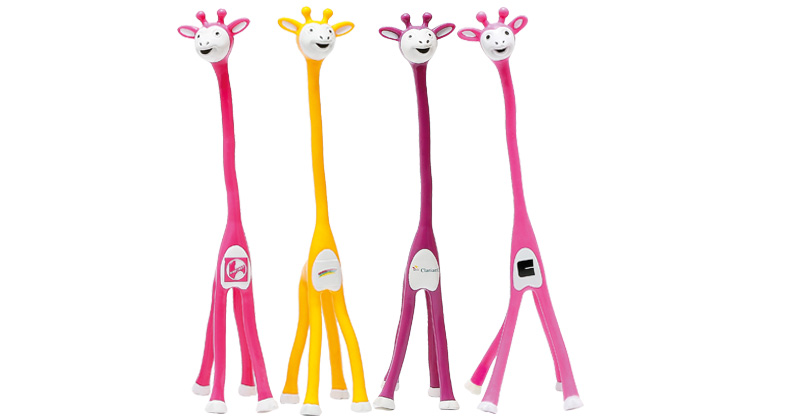 In 1997, when Hoechst’s pigments division was about to be merged with Clariant, the giraffe even came close to costing the executive responsible for its outfit his job. The color wasn’t the problem – a beautiful bright medium yellow that even the mascot’s real-life counterparts couldn’t take exception to. Due to the unsettled situation, however, the logo on the breast consisted of just three colored stripes, and the fact that the famous animal wasn’t clearly branded as Clariant’s had the new head of marketing raging like a bull.

Since then, the mascot has proudly worn the company’s name or bold initial – which, the giraffe has been heard to say, can also be taken to stand for »cool«, »competent« or »consistently committed to caring for the planet«. The year 2005, when Clariant launched its innovative Licocene® waxes, saw a special edition of Giraffa clariantis in transparent plastic: presumably good for escaping lions, though not human fans and followers, who enthusiastically greet each new release and greedily trade each other for rare specimens.

In the United States, the cult surrounding the mascot has grown so big that each unveiling is accompanied by drawings of the cheerful star, often showing it in situations tied to the changing locations of the fair, like playing the trumpet in New Orleans. “The giraffe is a party animal”, explains Todd Baxter, the artist who does these drawings and likes to give them “life and movement, so you can imagine that the giraffe is really, truly alive”.

For the mascot’s 50th birthday at this year’s fair, the portrait showed it blowing out the candles of its cake – which is not all that easy when your neck is made for eating food from trees. The coat the giraffe wore was dull purple: precisely the hue that the long, colorful history of Clariant’s beloved mascot started with. 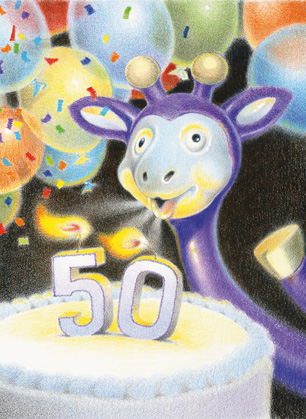