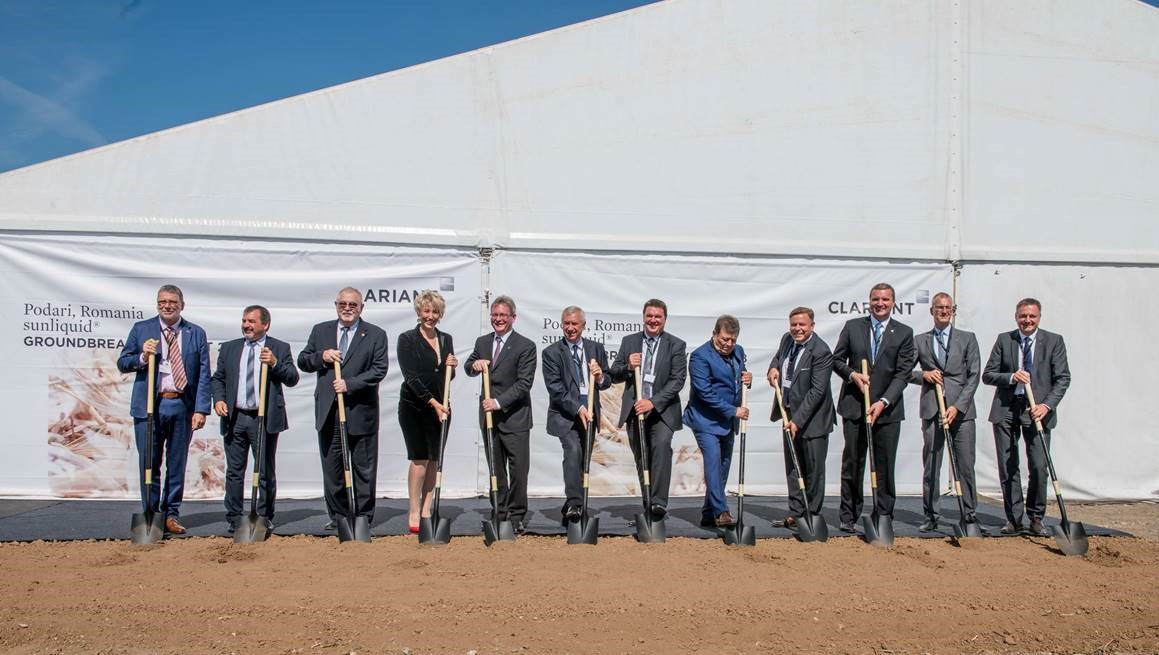 Muttenz, September 12, 2018 – Clariant, a world leader in specialty chemicals, today officially started construction of the first large-scale commercial sunliquid plant for the production of cellulosic ethanol made from agricultural residues. At the flagship facility, the sunliquid technology developed by the company is being used on an industrial scale for the first time. The occasion was marked with a traditional groundbreaking ceremony in Podari near Craiova in southwestern Romania, which was attended by official representatives of the Romanian government, the Swiss Ambassador Urs Herren, and a Clariant representation headed by Christian Kohlpaintner, Member of the Executive Committee.

Clariant Executive Committee Member Christian Kohlpaintner: “After more than a decade of research and development, Clariant is investing more than EUR 100 million in its first sunliquid plant. This technology is pioneering not only in Europe but also globally. Furthermore, in cooperation with European and national institutions, Clariant supports the industrial conversion of a region with this significant investment.”

The realization of the plant represents the biggest industrial commitment by an international corporation in this region[i]. At full capacity, the plant will process around 250 000 tons of wheat and other cereal straw sourced from local farmers to 50 000 tons of cellulosic ethanol annually. By-products from the process will be used for the generation of renewable energy with the goal of making the plant independent from fossil energy sources. The resulting cellulosic ethanol is therefore an advanced biofuel that is practically carbon-neutral.

The flagship plant testifies to the competitive viability and sustainability of the sunliquid technology on an industrial scale, and at the same time fulfils an important function as a reference facility for the worldwide marketing of sunliquid licenses.

The decision in favor of Craiova was due partly to the existence of a secure regional supply of feedstock and partly to the region’s existing logistic and industrial infrastructure. Construction of the plant will provide a whole range of benefits for the surrounding region of Craiova.

It will allow local farmers to industrially market straw for the first time, which was previously practically unutilized agricultural residue. During the construction phase of the new plant, several hundred construction workers will be employed from locally based companies wherever possible.

After completion, the plant is expected to provide around 300 permanent jobs in supporting industries serving the site, and in the transportation and storage of the feedstock. The plant itself will employ a workforce of between 100 and 120. Clariant plans to recruit its workforce locally, and provide training both in its own laboratories in Planegg near Munich and at the pre-commercial sunliquid plant in Straubing, Bavaria.

sunliquid – a sustainable and advanced biofuel

Cellulosic ethanol is an advanced, sustainable and practically carbon-neutral biofuel.It is produced from agricultural residue such as wheat straw and corn stover which is supplied by farmers. The straw is converted into cellulosic sugars. This is followed by fermentation to produce cellulosic ethanol. By using plant residues, cellulosic ethanol can extend the current production of biofuels to new feedstock and contributes to optimizing the efficiency and sustainability of biofuels. Cellulosic sugars also have the potential to serve as a building block for future production of bio-based chemicals.

sunliquid® IS A TRADEMARK OF CLARIANT REGISTERED IN MANY COUNTRIES.