A shortage of fossil resources, energy security, climate change, environmental protection – these are the issues concerning us today in the energy sector. Alternative sources of energy must be found to reduce our dependence on oil and nowhere is this more evident than in the transport sector. In the European Union, the US and other major economic areas, politicians have laid down basic frameworks to promote the use of climate-friendly biofuels.

Many companies show a growing interest in the production of ethanol from renewable lignocellulosic resources, such as agricultural residues. These resources are created in sufficient quantities worldwide as a by-product of current agricultural practices, as in the case of straw from cereal production.

The sunliquid® process developed by Clariant meets all the requirements of a technically and economically efficient, innovative process for converting agricultural residues into climate-friendly biofuel. Using process-integrated enzyme production, optimized enzymes, simultaneous conversion of cellulose and hemicellulose into ethanol and an energy-efficient process design, it has been possible to overcome technological challenges and sufficiently reduce production costs in order to arrive at a commercially viable basis.

Since 2009, Clariant has been successfully operating a first pilot plant at its research facility in Munich. This pilot plant is capable of producing up to two tons of ethanol per year.
Since July 2012, Clariant has been operating a precommercial plant in Straubing, which produces up to 1,000 metric tons of cellulosic ethanol every year. In October 2021, Clariant also completed the construction of its first commercial-scale cellulosic ethanol plant in Podari, Romania. For more information on this flagship plant click here

We offer comprehensive cellulosic ethanol solutions with integrated and therefore autonomous enzyme production. Our aim was to develop a process offering high yields at minimal cost. To this end, we have combined our patented processes with state-of-the-art technology to set ourselves apart from other companies.

Advantages of the sunliquid® process

A small percentage of the pre-treated feedstock is used for enzyme production, which is an integrated part of the process and takes place on-site at the ethanol plant. This makes a major contribution to the economic efficiency of the overall process, resulting in a significant reduction in production costs and ensuring independence from supply shortages and price volatility.

A bespoke enzyme mixture hydrolyses cellulose and hemicellulose chains to form sugar monomers. This step is also termed saccharification. The enzymes are highly optimized based on feedstock and process parameters, resulting in maximum yields and short reaction times under optimal conditions.

The innovative and highly energy saving purification method reduces energy demand by up to 50% compared with conventional distillation. It is based on thorough process planning and energy integration, resulting in an entirely energy self-sufficient process.

Lignocellulose is the feedstock used for our sunliquid® process. Lignocellulose provides structural support for cell walls in biomass gained from forestry and farming. Its stable structure is made up of cellulose, hemicellulose and lignin, the exact composition varying according to the type of plant. Within a short time, we are able to adjust our sunliquid® process to the most varied types of feedstock, including cereal straw, corn stover, bagasse, or energy crops such as miscanthus and switchgrass. We have processed wheat-straw, corn stover and bagasse at our demonstration plant in Straubing showing good results. A number of other lignocellulosic feedstock have been tested at pilot and lab scale. 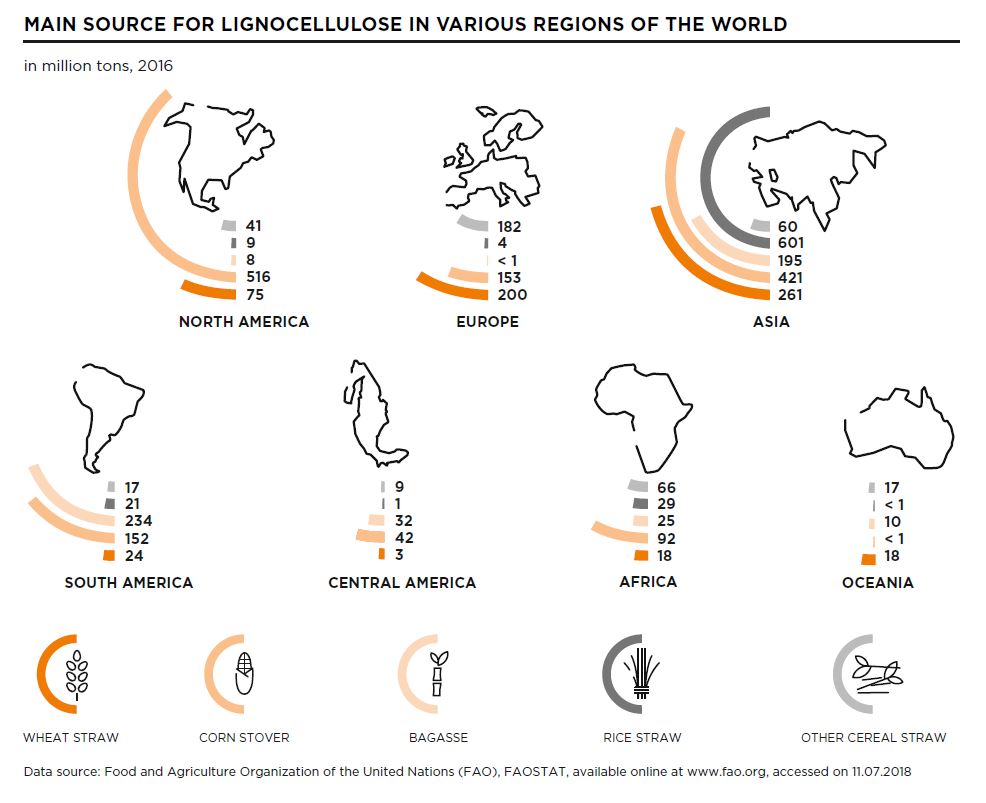 The USA, Asia, and the European Union are the leading producers of agricultural products. At a regional level, various straw sources are available for extracting lignocellulose based ethanol: While the focus in Europe is on the residues of wheat and barley production, in Asia large quantities of rice straw are available (while millet straw is dominant amongst the other types of cereal straw), in North America it is corn stover and in South America bagasse as a by-product of sugarcane production.

A study by the International Council on Clean Transportation (ICCT) estimates the realistic amount of agricultural by-products like straw that will be available in Europe in 2030 at 139 million tons – compared to 122 millions tons in 2013.

About 380 million tons of straw from wheat and other cereal and about 150 million tons of corn stover are produced every year in the EU alone. Studies expect this quantity to increase in coming years due to the growth in grain farming. Only a small fraction is currently returned to the field, used for livestock farming, or for mushroom cultivation. A study comparison shows that, depending on the region and the local conditions, up to between 30 and maximally 60 percent of the straw produced can be removed from the field and made available for further use.

The Brazilian Energy Plan scenario estimates that almost 26 million tons of bagasse will be available in 2030. Due to the high price fluctuations, combined processes in which refineries produce bioethanol as well as electricity are considered economically viable.

In the USA, corn stover is the main raw material, while part of this is also required to fertilize the soil. A study by the U.S. Department of Energy shows that the supply of raw materials is likely to undergo a fundamental change in the next twenty years. Besides agricultural waste products, the authors are forecasting an increase in energy crops, such as various species of grass and algae.

By 2040, almost 600 million additional tons of plant residues and special energy crops could be available for the generation of renewable energy sources in the USA.

The sunliquid® process is attractive from an ecological and economic perspective, as it uses the various agricultural residues that are available locally in the different regions. This saves transport and energy costs for the logistics of the high-volume residues, which would otherwise have a negative impact on the life cycle assessment.

One of the reasons behind the use of biofuels based on renewable resources is to reduce greenhouse gas emissions.

Cellulosic ethanol is a climate-friendly fuel. It is made from renewable lignocellulosic residues, which also contain lignin – a material which, although it cannot be converted into ethanol, can however supply energy for the manufacturing process. Compared with ethanol made from maize or wheat, the cellulosic ethanol produced by our biotechnological sunliquid® process boasts a hugely improved emission profile and therefore helps to reduce greenhouse gas emissions. Taking carbon capture into consideration, the greenhouse gas savings could reach up to ~120%.

The sunliquid® process has been running successfully in the pilot plant at our Munich research center since the beginning of 2009. In July 2010 we took the next step and we decided to construct Germany´s largest cellulosic ethanol plant to date in Straubing near Munich. The plant went into operation in July 2012. It confirms the technological feasibility of the sunliquid® technology at large scale.

Having a total volume of some 28 million, the entire project involves capital expenditure of around 16 million and investment in accompanying research projects amounting to just under 12 million. The Bavarian State Government and the German Federal Ministry of Education and Research (BMBF) are each providing support of around 5 million for these and other research assignments linked to the project.

Our decision to invest in a demonstration plant represents an important step towards commercialization of the sunliquid® process – and ultimately the market launch of a sustainable process for producing climate-friendly fuels.

Covering an area of approx. 60 x 30 m, the plant produces up to 1,000 tons of bioethanol per year. Initially, cereal straw was the main feedstock, some 4,500 tons being processed each year. In summer 2013 we started converting corn stover and sugarcane bagasse confirming the global potential of the technology.

Demonstration plants are necessary to verify the efficient performance of new processes on a production scale. The Straubing plant essentially serves to validate the sunliquid® process, but is however also flexible enough to steer other processes based on renewable resources to market maturity in the longer term. It will also serve to create training facilities for staff employed by both investors and subsequent production plant operators.

In October 2021, Clariant completed the construction of its first commercial sunliquid® cellulosic ethanol plant, which is located in Podari, Romania. At full capacity, the plant will convert approx. 250,000 tons of straw into 50,000 tons of cellulosic ethanol. For more information on the flagship plant, please visit www.clariant.com/romania

The sunliquid® process is intended for all those clients interested in one-stop licensing of an uncomplicated, full-scale turnkey process for the economic production of cellulosic ethanol. This is not limited solely to a customized concept for a production plant. We also supply all the components required for cost-effective operation of the production plant, including for instance starter cultures for producing enzymes and ethanol, as well as a special technology for energy efficient ethanol separation.

We plan projects together with our customers and carry out business assessments. In tandem with customers, we draw up concepts to secure supply of raw materials, along with sales strategies for the products. We recommend well-known and experienced partners for plant engineering and construction with which we have worked for many years. We offer customers training facilities at our demonstration plant prior to commissioning their own production plants. We maintain a team of experienced process experts as consultants for our customers. We also engage in the joint development of customized solutions based on our sunliquid® platform, modifying the process in line with individual requirements.

The sunliquid® process is outstanding for its